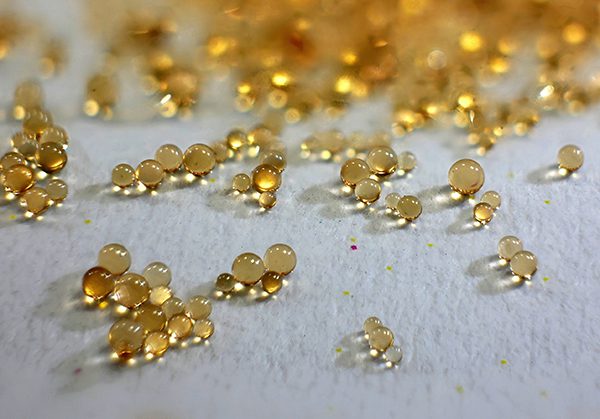 Demineralizers are an often-neglected component of industrial water treatment. Because demineralizer malfunction can cause issues with downstream processes, it is important to identify and treat problems early to reduce negative impact to your operations.

Demineralization is a process for high-purity water production using ion exchange. It is commonly used in industries such as semiconductor manufacturing and pharmaceuticals as well as in high-pressure boiler feedwater applications.

The schematic below shows the process flow from a cation unit all the way to a mixed bed polisher. (A basic demineralization stream would only include a cation unit and an anion unit.)

Inlet water is full of ions: cations such as calcium, magnesium, sodium, and potassium, and anions such as phosphate, alkalinity, sulfate, chloride, nitrate, and silica. Demineralizer systems remove these ions from water intended for high-purity processes.

Cations are first removed from the water in the cation unit. Hydrogen ions are exchanged from the resin beads for the cations in the inflowing water, lowering pH. The remaining anions combine with hydrogen ions to form their corresponding acids and hydrogen sulfide (H2S) if present.

The water then passes through a degassifier to strip carbon dioxide (CO2) from the water and expel it to help reduce anionic loading to the anion unit.

Finally, the anion unit removes anions from the water through ion exchange, releasing hydroxide ions into the anion stream. Water coming out of the anion unit will be relatively pure, likely under 2 µS conductivity, and contain only low levels of sodium and silica. Some applications, particularly high-pressure boilers, may need to run the water through a mixed bed polisher for further treatment.

A short run indicates low throughput. The quality of the produced water can be acceptable, but conductivity and/or silica breakthrough occurs early, and the system produces fewer gallons of process water between regenerations.

High leakage refers to worsening water quality throughout the service cycle. This could include higher sodium or silica levels, depending on the cause.

The Importance of Keeping Records

At a minimum, we recommend keeping track of the following data:

Feedwater quality can vary over the course of the year. A demineralizer system is designed for a set number of ions, and conductivity changes will impact the system throughput.

Low source water conductivity can often mask poor resin performance because the throughputs are longer. As the conductivity increases, it can cause potential performance issues, so ensuring proper demineralizer operation is important to maintaining system health.

Resin loss leads to reduced water production, causing short runs. It may be triggered by backwashing at too high a flow rate, which lifts resin and solids out of the unit.

We recommend checking resin levels every time the vessel is opened. Resin levels should be approximately 6 inches below your regenerant distributor (check schematics to confirm the position of the regenerant laterals). If resin is lost, it has to go somewhere: check where the backwash discharges to determine if any resin has been lost.

Water density varies with temperature (cold water is denser than warm water), so backwash rates may need to change with the seasons. A single, set backwash flow rate could starve the demineralizer in the summer or provide excess flow in winter. Depending on where your facility is located, the ideal backwash flow for the summer months may be much higher than what is required for winter. The ideal backwash for most resins is 50% bed expansion.

When backwashing does not occur as needed, solids from the feedwater build up in the resin, causing mud or silt fouling, also known as total suspended solids (TSS) fouling. Fouling can also be caused by issues with an upstream clarifier. In general, influent water to cation units should have no more than 5 Ntu of TSS.

Mud fouling can be treated by:

Solids and silt fouling can lead to channeling, the preferential flow through a portion of the resin bed. When mud or silt and solids foul a resin bed, water will flow through the path of least resistance, creating large canyons or cracks. Insufficient backwashing is a major cause of channeling.

To test for channeling, perform a manual regeneration and let the unit backwash. After backwashing, skip all other regeneration steps until the fast rinse. If your water quality returns, your bed was channeled, and the resin may need to be cleaned.

A Quick Note about Packed Beds

Packed bed demineralizers make excellent quality water with lower leakage than co-current regenerated units. However, the resin is packed between two plates in these vessels, leaving no room for it to expand during backwash to remove solids. Packed beds require external backwash tanks where resin can be removed from the service vessel to be fluffed and cleaned of solids every 1–4 months. If your system does not have a backwash tank, ensure your feedwater is high quality, with a target Silt-Density Index (SDI) of less than 5.

Chemical Damage: Resin can chemically degrade, causing short runs and higher leakage. If a free chlorine residual is carried from the front of the plant through the clarifier to the demineralizer system, the cation resin becomes susceptible to chlorine damage. Dechlorinating water before it enters the cation units is best practice for mitigating this issue.

Sulfuric acid is typically fed at 4-10 lbs. of acid per cubic foot of resin, and caustic is fed at 3–8 lbs. per cubic foot of anion resin. The recommended concentrations are 1–5% for acid and approximately 4% for caustic.

Important Note: When conducting the hydrometer measurement, temperature should also be measured, as it will increase during the exothermic reaction of acid and caustic. The hydrometer reading will need to be corrected with the use of a temperature compensation chart.

This regeneration required a 3% acid step and a 6% acid step. The high-range conductivity probe showed target acid concentrations were being reached, but manual hydrometer sampling indicated that acid was underfed by at least 1% in each step. After calibrating the conductivity meter, the plant achieved proper operational levels.

Hardness fouling occurs when hardness precipitates as calcium sulfate in the resin bed, causing high leakage and short runs. When using sulfuric acid, it is important to pay close attention to the acid concentration in the system. Sulfuric acid regeneration causes calcium and barium from the resin to react with the sulfates to form and precipitate calcium sulfate (gypsum). Step-wise acid addition can prevent hardness precipitation.

Calcium sulfate precipitation will appear as white, snowy flakes in the acid outlet sample. This indicates one of two things:

1. The dilution flow rate is too slow, or

2. The first step acid injection is too high (potential hardness fouling in the resin bed)

Organic fouling is a common issue for demineralizers, particularly in systems that use surface water for makeup. It causes long anion rinse times and shorter runs.

If you suspect  your system is fouled with organics, monitor the outlet color during caustic injection. If it darkens to a tea-like color, approaching 8–12 on the VCS scale, the anion resin is probably organically fouled.

Surface waters are loaded with tannins and lignins, which are long-chain organic acid molecules. Negatively charged, these molecules behave like anions in the feedwater and will attach to the anion resin. Once bound to positively charged functional groups on the anion resin, the long chain molecules get wrapped up in the resin and block other ion exchange sites.

When caustic is added during regeneration, sodium ions bond to the remaining sites on the negatively charged organic chain molecules. These will slowly elute off during the fast rinse and extend rinse times. As a result, long rinse times are also a good indicator of organic fouling.

Note: The removal of organics from the anion resin will not be 100% effective. Typically, the percentage of remaining organics in Type I resin is 70%. Over time, these organics accumulate, and a caustic brine squeeze will need to be performed to remove them.

(This is a brief overview of the procedure; consult with your water treatment provider before performing a caustic brine squeeze to ensure all necessary steps are taken.)

2. Inject with 8–10% brine or sodium chloride and soak the resin for 40 minutes

3. Repeat this process until the color of the cleaning solution lightens to a tea-like color

Iron can foul cation resin, resulting in short runs. High iron concentrations associated with well water, ferric chloride, or ferric sulfate use can result in iron precipitation in the resin bed. Iron fouling is fairly easy to detect with an off-site resin sample evaluation. Samples should be taken every time a vessel is open and at least once per year.

Iron-fouled systems can be treated with iron cleaners such as ChemTreat’s RL2016.

DADMAC fouling causes a “plastic bag” effect, as if a plastic bag were caught up in the resin, preventing larger ions from moving through the bed and causing hardness leakage. If coagulant fouling is suspected, the methylene blue dye test can be run on a sample sent off-site. The off-site laboratory test will evaluate whether the resin uptakes the dye, which would indicate coagulant fouling.

It is best practice to inspect vessel internals annually. During these inspections, a core resin sample should be taken, and the following items noted:

The top of the resin bed

Does the shape of the bed have an even, flat top?

Decarbonators tend to be neglected more frequently than demineralizers. These systems remove CO2 and H2S, and, if functioning improperly, will cause short runs. If a decarbonator issue is suspected, check the CO2 concentrations in and out of the unit to determine the efficiency of CO2 removal.

Decarbonators act like giant air scrubbers. If their filters are failing or pulling in dirty air, they can contribute to downstream anion unit fouling. Additional problems can include incorrect spray distribution, improper air flow, and a collapsed or biologically fouled packing element.

Three Things to Look for when Troubleshooting Mixed Bed Issues

Mixed beds should be rinsed down to approximately 0.1 or 0.2 µS within an hour. A longer rinse time indicates a problem with the system. In these cases, there are three main things to check.

1. Incomplete separation of cation and anion resin after backwash: There should be a clear, sharp separation between the two resins. If the separation is poor, cross-contamination may occur during regeneration, causing extended rinse downtime.

3. Failure to properly drain: The bed should be drained down before the mix to the correct level. If draining too high or too low, a good mix will not occur.

ChemTreat is here to help you troubleshoot your demineralizers and associated water systems. We can help you analyze the resin, and our technical experts and local team can pinpoint issues and create a treatment plan best suited to the needs of your facility.

As with all other technologies, due diligence is necessary to determine the feasibility for utilizing these methods. It is always important to consult your equipment manuals and guides and seek guidance from your local water treatment representative to address your specific needs.