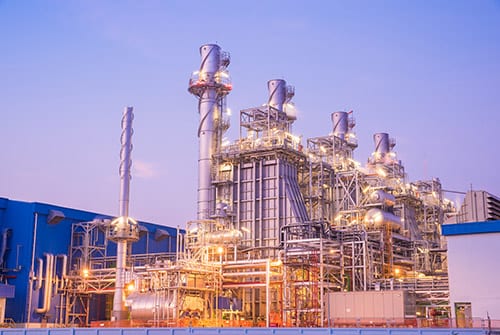 A combined-cycle power plant in the Northeastern US was experiencing high iron concentrations throughout the steam cycle. High iron residuals, particularly in the feedwater and low-pressure (LP) drum circuits, were persistent even when maintaining the steam cycle within all-volatile treatment (AVT(O)) standards with an ammonia-only treatment program.

Ammonia-only programs may cause the low-pressure evaporator to be more susceptible to flow-accelerated corrosion (FAC) because of volatility and lack of pH control through various circuits of the cycle. ChemTreat proposed treating the steam system with a film-forming amine (FFA) in addition to the current ammonia-only program to reduce FAC potential, thus lowering corrosion potential and corrosion byproducts (i.e., bulk water iron concentrations).

The focus of the trial was to minimize bulk water iron concentrations by reducing active corrosion and developing a consistent blowdown protocol to clean up previously generated iron corrosion byproducts.

Prior to the beginning of the FFA trial, iron residuals were around 500–1,000 ppb in the LP evaporator water. After 10 months of feeding FFA, the low-, intermediate-, and high-pressure drum iron residuals all dropped to an average of less than 5 ppb. Piles of loose iron building up prior to FFA treatment were greatly diminished, and no loose iron dusting was found on the drum walls.

Seventeen months after the beginning of the trial, iron concentrations decreased by 99.5, 89.6, and 70.7% in the LP, IP, and HP drums, respectively.

In more absolute terms, using the cycle mass balance, this equates to a decrease in iron corrosion byproducts of 411, 43, and 29 pounds per year in the LP, IP, and HP drums, respectively.

FFA application dramatically reduced iron generation and transport throughout the cycle. This program was also much more effective at controlling FAC than the previous all-ammonia treatment.

10 months after start of FFA treatment, FAC pattern is absent

CONNECT WITH A CHEMTREAT EXPERT

How can we help you?