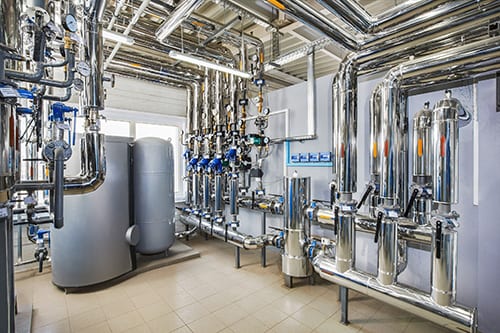 Corrosion prevention in steam generators is of critical importance. At present, the most notable mechanism in this regard is flow-accelerated corrosion (FAC), which afflicts many steam generators around the world.

It has been well-established over many decades that chemistry can be successfully utilized to minimize corrosion in steam generating and condensate return systems, but many plant personnel tend to think chemical programs are designed only to treat the bulk water. In actuality, the primary function of a good program is to protect metal surfaces. At ChemTreat, we kept this in mind when developing a film-forming amine treatment program for steam generator corrosion protection.

The concept behind film-forming substances, amines or otherwise, is to protect metal surfaces by establishing a thin, uniform barrier on the metal. The general idea is not new, as decades ago film-forming amine (FFA) chemistry was attempted in steam generators using a common compound called octadecylamine (C18H39N). The amine group on each molecule attaches to the metal substrate, and the long-chain organic compound extends into the water and acts as a barrier. However, poor control and lack of detailed knowledge of the overall chemistry often led to problems, including formation of gelatinous spheroids, or “gunk balls,” in the common vernacular, which fouled steam generators.

Fast forward to today. Advancements in chemical synthesis techniques and analytical instrumentation have led to the development of new film-forming substances much more effective at protecting metal surfaces, including the FFAs in ChemTreat’s TITAN360™ product line.

Consider the effect of this chemistry on carbon steel, which is the common metal for feedwater systems, boiler tubes, and other steam generator components. When carbon steel is first exposed to water in a steam generator, the surface forms a layer of grayish-black magnetite (Fe3O4). This relatively dense “topotactic” layer of oxide over time becomes overlaid by a looser, “epitactic” layer composed of iron oxide deposition products. Ions can move in and out of these layers, and in fact it is the movement of ferrous ions (Fe2+) out of the metal substrate at flow disturbances that leads to FAC. TITAN360™ products penetrate the epitactic layer and form a significantly strong bond with the topotactic layer and metal substrate underneath.

Figure 1. A metal surface treated with TITAN360™. Note how the water does not spread out and penetrate the surface, but beads instead.

Data from successful applications of TITAN360™ programs are available, but it should be noted that implementation of these programs, as with any other, cannot be performed without the support of water treatment specialists. A careful analysis of system operation and past/present chemistry is necessary. Rigorous monitoring is required to ensure the chemistry is performing as planned. A chemical cleaning of the unit may be required if heavy iron deposits are already present.

Another aspect that makes the chemistry particularly attractive is its ability to protect system components during downtimes. Applications are not limited to steam generating systems, as the chemistry has excellent potential to protect long and complex condensate return systems, such as might be found on college or hospital campuses and in district heating systems, to name just a few.