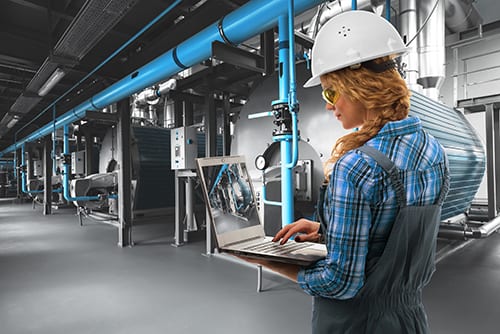 During the heyday of power plant construction in the US, particularly after World War II, large, central stations with multiple steam generators were the industry standard. Coal was the primary fuel source, followed by nuclear energy, with some oil-fired units, mainly on the East Coast. Most of these steam generators were designed to be base loaded, with moderate fluctuations in power output depending on daily and seasonal demand requirements. Continuous operation is best for power generators, but these days, load cycling is the norm for newer combined cycle units as well as many of the remaining formerly base-loaded coal units. Daytime operation (with shutdown at night), is common for many power units, particularly combined cycle plants.

Frequent cycling places significant thermal and mechanical stresses on equipment, and it also imparts chemical stress, creating the potential for oxygen corrosion to occur. When a unit comes off-line, the boiler water begins to cool, superheater and reheater steam collapses, and air may be pulled into the unit at even the smallest of openings. Oxygen can induce significant carbon steel corrosion, particularly in localized areas at the sources of air in-leakage. When the unit restarts, corrosion products (principally iron oxides) can transport to the boiler and precipitate, usually on the hot side of the boiler tubes. The deposits impair heat transfer and can subsequently serve as sites for under-deposit corrosion. This corrosion mechanism can be quite severe in the high-temperature/high-pressure boiler environment.

Dissolved oxygen is also a driving force for corrosion fatigue. Basic mechanical fatigue is easily observable; just bend a paper clip or piece of wire back and forth a number of times and it will fracture. Steam generator components also suffer fatigue caused by cycling, but when a corrosive agent such as oxygen is present, the fatigue process may be magnified. Oxygen penetrates the small microcracks that fatigue initially induces and accelerates the corrosion mechanism.

Frequent or regular cycling can also play havoc with boiler water treatment programs, particularly if the chemistry utilizes phosphate. Many years of research has shown that tri-sodium phosphate increases in solubility up to a temperature of approximately 300°F, after which the solubility declines steadily as temperatures increase. Many high-temperature steam generators operate near or perhaps even above 600°F. Most of the phosphate added for chemistry control precipitates on the boiler tubes at these temperatures, but when the unit is taken off-line, the phosphate re-dissolves. Chemistry can be very difficult to control under such conditions, and may require carefully planned and monitored programs.

Additional details on methods to protect steam generators during shutdown and startup conditions will be presented in future posts.

In the meantime, if you are having chemistry control difficulties with your units as a result of cycling issues, please contact ChemTreat for assistance in designing a treatment program customized for your application.

As with all other technologies, due diligence is necessary to determine the feasibility for utilizing methods. Always consult your equipment manuals and guides.