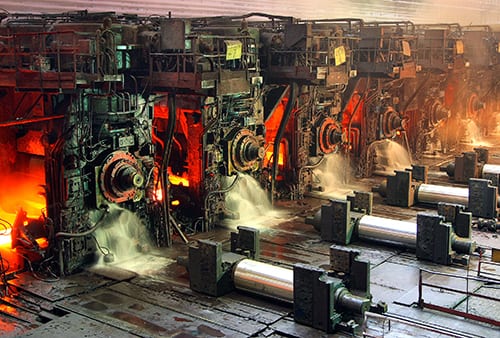 Cooling water is a critical commodity in the steel industry due to the very high heat generation and energy transfer in blast furnaces, basic oxygen and electric arc furnaces, steel finishing processes, etc. Many heat exchangers rely on cooling either directly or indirectly from open recirculating systems, i.e., cooling tower–based networks. Scaling, microbiological fouling and corrosion in these cooling systems can cause serious problems and may even influence plant production. This paper examines advancements and cutting-edge developments in open recirculating cooling water treatment, particularly related to corrosion and scale prevention. The paper also examines improved technology for treating water recovered from direct spray processes. The technology can offer significant cost savings at a plant.

Impurities and microorganisms in water (and in the air that enters cooling towers) influence scale formation, corrosion and fouling via a variety of mechanisms. These problematic issues are often interrelated, as illustrated in Fig. 1.

For example, scale formation and biofouling, besides restricting heat transfer, can induce underdeposit and crevice corrosion. Corrosion, in turn, can generate products that may deposit elsewhere and so on.

As Fig. 1 indicated, corrosion, fouling and scale formation may be influenced by the other factors. Treatment methods for scale and corrosion control have in large measure evolved together, which will be explored in the following section. Important for that discussion is a brief review of basic corrosion fundamentals.

Iron is oxidized at the anode and enters solution as the ferrous ion (Fe+2). The process releases electrons that flow through the metal to the cathode, where the electrons reduce dissolved oxygen to hydroxyl ions (OH–). Hydroxyl ions then react with the solvated iron ions to complete the electrical circuit and form an initial product of Fe(OH)2, which continues to oxidize to eventually form rust, with a basic formula of Fe2O3∙xH2O. Uncontrolled oxygen attack can cause severe damage in piping networks and also generate deposits that may partially or completely restrict flow.

This corrosion mechanism can be easily demonstrated in the lab by placing an iron bar in a solution of hydrochloric acid. Almost immediately, hydrogen bubbles begin to appear while the metal rapidly disintegrates.

Corrosion inhibitors function by slowing down reactions at either the anode, the cathode or sometimes both. This now leads to discussion of a very popular program from the last century that was simplistic in nature but provided both good scale and corrosion control. Environmental issues required abandonment of the technique, which led to a major change in treatment method followed by the evolution occurring now.

In the years leading up to the 1970s, the most common method to protect carbon steel was based on chromate chemistry for corrosion protection, with sulfuric acid feed for scale control. The program inhibited calcium carbonate (CaCO3) scaling by the reaction of sulfuric acid with bicarbonate ions (HCO3–) to convert the ions to CO2, which escape as gas and lower the scaling tendency of the solution. Eq. 2 is representative of this chemistry:

A typical pH control range was at or near 6.5 to 7.0. The second compound in the formulation, disodium chromate (Na2Cr2O7), provides chromate ions
that react with carbon steel to establish a protective, pseudo-stainless steel layer, particularly in the oxygensaturated cooling water generated by cooling towers. Acid-chromate programs performed extremely well in many applications, and chemistry control was quite straightforward.

For heat exchangers with copper alloy tubes, supplemental azole chemistry was, and still is, common to protect these metals. This paper does not explore azole chemistry in depth, but in brief azoles are organic compounds (a benzene ring at the core) with nitrogen functional groups.

The nitrogen groups attach to copper, with the plate-like organic rings forming a monomolecular layer on the metal surface to protect it from the environment. A variety of azoles, with various side groups, have been developed to improve bonding properties and also to increase azole resistance to degradation by other chemicals such as oxidizing biocides.

Increased understanding of the toxicity of hexavalent chromium, in large part due to the efforts of Erin Brockovich, led to a ban on chromium discharge to the environment, which essentially eliminated chromate treatment for open cooling water systems. The replacement program was radically different, with a key concept being operation at an alkaline pH to assist with corrosion control.

The Emergence of Phosphate/Phosphonate Chemistry

Treatment quickly evolved to phosphate-based chemistry for both scale and corrosion prevention. The programs typically function at a mildly alkaline pH, which minimizes general corrosion.

Beyond the pH aspect, the chemistry also provides additional corrosion protection because phosphate will react with ferrous ions (Fe+2) produced at anodic sites to form a reaction-limiting deposit, while calcium phosphate [Ca3(PO4)2] precipitates in the local alkaline environment at cathodic sites to inhibit electron transfer. However, even small upsets in phosphate programs can cause severe calcium phosphate fouling, and, at one time, excess Ca3(PO4)2 deposition became almost as great a problem as calcium carbonate scaling had been before. Accordingly, treatment methods evolved to more forgiving methodologies, where in many cases the backbone of these programs is organic phosphates (phosphonates).

Phosphonates attach to deposits as they are forming and disrupt crystal growth and lattice strength.

A common phosphate/phosphonate treatment program might include one or perhaps two of the phosphonate compounds in low mg/L dosages for primary scale control, 5–15 mg/L or so of orthophosphate for additional scale control and corrosion protection, and perhaps 0.5–2.5 mg/L of zinc. Zinc reacts with the hydroxyl ions generated at cathodes to form a precipitate [Zn(OH)2], which provides additional cathodic protection. (It should be noted that zinc discharge is also coming under tighter regulations.) Typically included in these formulations is 5–10 mg/L of organic polymer for control of calcium phosphate deposition.

Phosphate/phosphonate programs are far from simple, and under- or overfeed can result in either corrosion or scale formation. Even with seemingly proper chemistry, the corrosion-inhibiting deposits are porous, and also may wash away. And, with respect to environmental concerns, phosphorus discharge presents increasingly difficult problems.

Phosphorus, along with nitrogen and carbon, is a macronutrient that is essential for all life forms. Algae derive their carbon requirements from inorganic bicarbonate and carbonate, utilizing energy from sunlight to convert the inorganic carbon into organic carbon for cellular tissue growth. Some species of algae are also capable of “fixing” atmospheric nitrogen
gas, using the nitrogenase enzyme to convert N2 into ammonia and other compounds required for the biosynthesis of nucleic acids and proteins. Common among the photosynthetic nitrogen-fixing species are cyanobacteria, commonly referred to as “blue-green algae.” Phosphorus is often the limiting nutrient for growth in aquatic systems because it is present in very low concentrations relative to that required by plants and microorganisms.

Cyanobacteria are known for their extensive and highly visible green blooms. Fig. 8 shows an aerial photograph of a cyanobacteria bloom in the shallow western basin of Lake Erie in 2011.

The unpleasant and unsightly algae growth in Lake Erie resulted in fouled beaches, sharply reduced tourism and a decline in fish populations. Apart from their noxious sensory impact, cyanobacteria also produce microcystins and other cyanotoxins that are toxic to fish, birds and mammals. Many readers are undoubtedly aware of massive toxic algae blooms in other locations, most notably Florida.

Adequate control of algae may require a substantial feed of microbiocides, which can greatly increase the cost to treat the cooling water.

These issues are leading to a new evolution: cooling water treatment with polymers and no phosphorus (and often no zinc) component. Successful applications for scale control have long been known, but now new materials for corrosion inhibition are proving successful, including at steel plants.

The Emergence of Polymer Chemistry

However, many other deposits are possible, including calcium and magnesium silicates, calcium sulfate, calcium fluoride and manganese dioxide, to name some of the most common. The need to combat these
and other scale-formers has generated development of co- and ter-polymers, containing alternative or supplemental functional groups including sulfonates (SO3–), acrylamide (H2N-C-O) and others. The polymers inhibit scale formation by two mechanisms: ion sequestration and crystal modification.

But another very important question remains: “How effective is a non-P program for corrosion inhibition?” In the first place, non-P treatments have been designed to operate at an alkaline pH range (7–9), which tends to minimize general corrosion of metals. But even so, corrosion cells can still develop in an alkaline environment. The key is that the corrosion inhibitor establishes a direct protective barrier on metal surfaces. One product that has emerged, FlexPro®, combines a group of chemistries that “interact directly with metal surfaces to form a reactive polyhydroxy starch inhibitor (RPSI) complex that is independent of calcium, pH or other water chemistry constituents.”1

Full-scale application of the chemistry has proven very effective. In one instance at a large industrial complex in the southeastern U.S., RPSI replaced previous polyphosphate and then zinc chemistry. Carbon steel corrosion rates have been reduced from 0.20 to 0.25 mm/year to 0.0025 to 0.0075 mm/year. On a secondary note, the change from zinc to RPSI was in part influenced by problems with severe algae formation in a clarifier and recycle pond at the plant. The removal of phosphate from the water solved that difficulty.

In another example at a large chemical plant on the Gulf Coast, traditional phosphate chemistry proved satisfactory for corrosion control, but calcium phosphate deposits caused fouling in some of the plant’s plate-and-frame heat exchangers. Such exchangers are notorious for low-flow locations and deposit accumulation. Conversion to RPSI chemistry maintained excellent corrosion protection and eliminated phosphate deposition.

The water treatment chemistries and technologies discussed here are suitable for many industrial applications, as outlined in the following example from an SSAB rolling mill.

At the SSAB mill in Mobile, Ala., USA, the FlexPro chemistry has been applied to both the non-contact cooling system and to the hot strip mill direct-contact spray cooling system. Fig. 12 illustrates the reduction in corrosion rate following the change from phosphate chemistry to RPSI chemistry.

As can be seen, not only was the corrosion rate reduced, but control became more stable following introduction of the polymer chemistry. Even more pronounced results were achieved in the service water cooling system (Fig. 13).

An application that is unique to steel mills as opposed to many other industries is the protection of metals cooled by direct sprays. The RPSI treatment has been implemented at the plant’s hot strip mill for more than a year, with results shown in Fig. 14.

To re-emphasize, the key is that this chemistry establishes a direct protective layer on steel rather than relying on precipitation of phosphate compounds to inhibit corrosion. The change in chemistry has provided the following benefits to the plant:

Improvements in cooling water treatment stand to benefit many industries, not the least of which is the steel industry. Plant owners, operators and technical personnel now have access to new, enhanced tools to reduce corrosion and scaling in not only non-contact cooling water systems, but direct spray applications as well. Improvements can save plants significant costs via infrastructure protection and increased equipment reliability. And research and testing continue with regard to other potential process enhancements.

© 2020 by AIST. Distributed with permission of AIST. All other distribution is strictly prohibited.