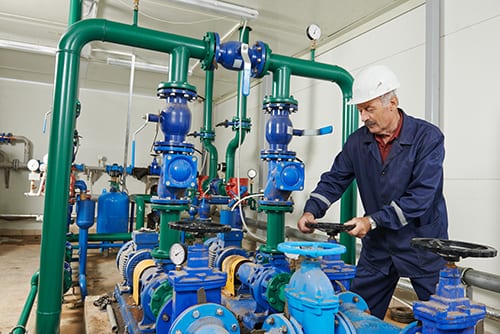 High-purity makeup water production and precise boiler water/steam chemistry control are critical for high-pressure steam generators in the power industry. However, many industrial plants utilize low-pressure boilers to produce process steam for various applications, including heat for chemical reactors, evaporators, building spaces, and so forth. Even though treatment programs for these units are often considered to be less rigorous than for high-pressure boilers, plant personnel frequently underestimate the corrosion and scale-forming difficulties that result without proper selection and operation of makeup water and condensate return treatment systems.

For lower-pressure steam boilers (units up to approximately 600 psi that do not drive turbines), makeup water treatment is often not extraordinarily rigorous. Usually, the leading concern is the potential for calcium carbonate (CaCO3) scaling, as illustrated by the following reaction of calcium ions (Ca2+) and bicarbonate alkalinity (HCO3– that can occur in hot water systems and boilers.

CaCO3 is the whitish-tan material that appears in home hot water piping and shower heads and is often incorrectly referred to as “lime scale.”

For decades, a typical primary treatment method for industrial boiler makeup was sodium zeolite softening. In this process, the water passes through beds of ion exchange resin, where the hardness ions calcium and magnesium are swapped for sodium. The softened stream, with the remaining impurities including alkalinity, chloride ions (Cl–), sulfate ions (SO42-), silica (SiO2), etc., then feeds the boiler.

This straightforward method offers both advantages and drawbacks. For example, the single process of sodium softening, as compared to those makeup techniques needed for high-pressure steam generators (for example: ultrafiltration, reverse osmosis, and RO effluent polishing) save the plant money in equipment and operating costs. But sodium softening does not touch the other ions, many of which can be problematic. Alkalinity may convert to carbon dioxide (CO2) in the boiler, which then carries over with steam. The CO2 can lower the pH in condensate return, possibly inducing corrosion issues in these systems. Chloride, and to a lesser extent sulfate, can be nasty impurities, especially in combination with oxygen in the boiler. The compounds may also concentrate under porous boiler tube deposits, usually iron oxide corrosion products transported from elsewhere, e.g., condensate return systems, to induce under-deposit corrosion (UDC).

One final point to consider: over the years, ChemTreat personnel have seen many instances of scale formation and corrosion in steam-generating systems, where the primary problem was traced back to upsets or poor maintenance of sodium softeners and other makeup treatment equipment, which allowed excessive impurities to enter the system. The water/steam plant seems to be neglected until problems arise, and the same is often true with regard to controlling condensate return chemistry. Look for more details in upcoming posts!

Part 2 of this series will examine modern technologies that can remove most of the impurities from the makeup water feed, which, in turn, can significantly improve boiler reliability.