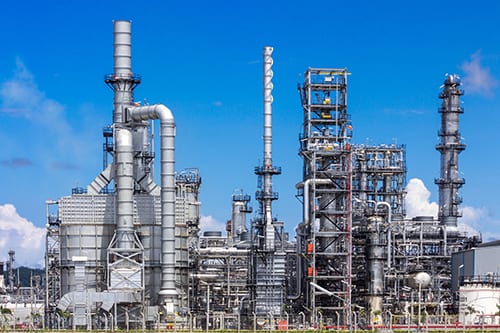 A large chemical plant in the Gulf Coast was feeding phosphate-based corrosion inhibitors to protect their heat exchangers with skin temperatures in excess of 160°F. Because phosphate (PO4) can be difficult to control, the plant suffered from both corrosion caused by underfeeding PO4 and severe phosphate deposition caused by overfeeding PO4. These issues hindered the reliable operation of the cooling systems, affecting the plant’s operating performance. Plant personnel had to regularly clean the heat exchangers, resulting in production loss caused by downtime.

In 2015, the plant reached out to ChemTreat for help.

In late 2015, ChemTreat started implementing proprietary non-phosphate, non-zinc, non-fouling FlexPro CL5685 technology to mitigate the corrosion and scaling issues at the plant. This resulted in dramatic improvement of corrosion rates and heat transfer efficiency in the heat exchangers.

After a year of using this technology, the equipment inspection during the turnaround cycle in 2017 showed much cleaner-looking heat exchangers. The iron and copper in the tower had also been reduced, indicating FlexPro was providing adequate corrosion and scale inhibition.

However, some of the inspected heat exchangers had a few surfaces that were not passivated completely.

Based on these findings, ChemTreat implemented next-generation FlexPro CL5685 technology with a combination of anodic and cathodic inhibitors for steel and halogen stable triazole technology for copper.

This further improved the corrosion performance of the heat exchangers and resulted in clean heat exchanger surfaces thanks to the non-fouling nature of FlexPro technology.

Iron and copper levels were maintained at historically low levels after FlexPro application.

Since implementing FlexPro at this large chemical plant, the following results have been achieved:

Tower iron and copper levels have declined steadily since ChemTreat took over at this facility in late 2015, indicating the plant’s critical assets are being protected.

No calcium phosphate or zinc deposits

Contact us to learn more about FlexPro and how ChemTreat can help you improve the water treatment at your facility.