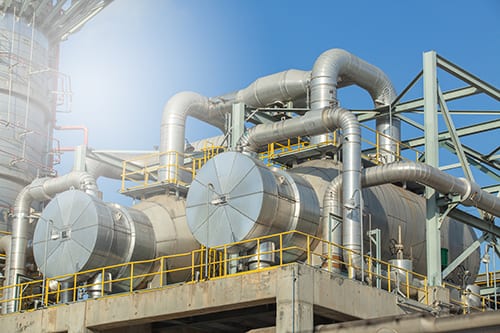 In 2015, a large chemical plant in Trinidad was experiencing the following operating conditions:

The economic impact of these conditions included:

ChemTreat representatives approached the plant’s management team with a short-term plan to provide immediate relief for the most pressing issues and were given the opportunity to demonstrate our company’s range of capabilities.

Picture of the inlet section of the surface condenser. Poor vacuum directly impacts the plant’s productivity. This was taken before ChemTreat FlexPro treatment was applied. There is trash from the tower fill on the tube sheet and scale and corrosion byproducts laid down on the inlet piping and plenum.

Six months after ChemTreat began treating the cooling system, the plant completed a turnaround (TAR) of their systems. The system performance had considerably improved as a result of better dispersion, but some corrosion remained on the tube surfaces. This is a challenge posed by stabilized phosphate-based technologies as they require tight controls: overfeed can cause scaling and underfeed can cause corrosion. As a result of the inspections carried out during the TAR, ChemTreat recommended our high-performance, non-fouling FlexPro technology, which provides the following key advantages:

After one year of FlexPro treatment, there was significant improvement in the corrosion, scale, and fouling issues on the customer’s surface condenser.

One Year After FlexPro Treatment Began

One Year After FlexPro Treatment Began

In mid-2016, the existing bundle was changed because of multiple tube failures. Metallographic analysis of the tubes revealed extensive tube loss caused by the microbiological infestation of the system that occurred prior to ChemTreat’s program management. The bundle had reached its “end of life” stage.

As part of their operational risk management program, the plant routinely keeps a spare bundle for the surface condenser. The cost of re-tubing this item is approximately $75,000. The designated spare bundle was not available at that time and the only option was to use a bundle that was awaiting refurbishment.

Owing to the condition of the newly installed bundle, the plan was to replace it after a three-month period with the designated spare. Following six months under the FlexPro program, an inspection of the exchanger revealed it was in acceptable condition to remain in service. As of August 2020, the bundle (previously earmarked for refurbishment) remains in service. The dull-grey look indicates the FlexPro technology is forming a persistent passive film on the metal surface and protecting it from corrosion.

Furthermore, improvement in vacuum performance and the maintenance activities performed by ChemTreat during the TAR resulted in increased production, and the resulting revenue gain ended up covering the annual cost of the cooling water treatment program.

Three years after FlexPro treatment began, there is no visible evidence of scale and corrosion byproducts on the inlet piping and plenum.

A closeup of the inlet piping three years after FlexPro treatment began.

Over time, there were opportunities to demonstrate the effectiveness of the FlexPro treatment in other heat exchangers at the plant.

A combination of heat exchanger performance monitoring and equipment inspections has fully validated the utilization of the FlexPro treatment in reducing the known buildup of scale and corrosion byproducts on the plant’s heat exchangers. The program has also proven effective in minimizing any new challenges, including changes in incoming water chemistry and upset plant operating conditions.

ChemTreat’s unique product offering and the support of its water treatment specialists helped the plant avoid a potential shutdown and improve their reliability and productivity.