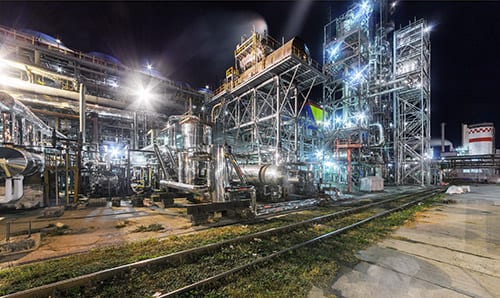 An ammonia plant in the midwestern United States is trying to reduce phosphorus discharge to comply with environmental regulations. Since cooling water is the largest contributor to the outfall flow and the plant was using a phosphate-based corrosion inhibitor program, the plant asked ChemTreat for help reducing phosphate usage in the cooling system without compromising system performance or increasing treatment costs.

This graph shows the iron level comparison for the phosphate and FlexPro programs at another cooling tower at the same facility. Two turnarounds are indicated by the red lines. The iron levels are much lower during the FlexPro program and consistently lower than 0.5 ppm, indicating FlexPro’s superiority at controlling iron levels.

This ammonia precondenser on the urea cooling tower loop shows no evidence of deposition, fouling, or corrosion after 1.5 years on the FlexPro program.

One of the main goals of the FlexPro program was to reduce the phosphorus loading in the customer’s discharge. This table illustrates the steady reduction of phosphorus loading since ChemTreat began treating the cooling towers with FlexPro.

Overall, FlexPro treatment has demonstrated significant improvement over the phosphate-based program in terms of corrosion rates, heat exchanger cleanliness, and phosphorus loading reduction in the discharge.

After a year and a half of evaluating the performance of this program in one cooling tower, all towers in the plant were converted to FlexPro.

CONNECT WITH A CHEMTREAT EXPERT

How can we help you?