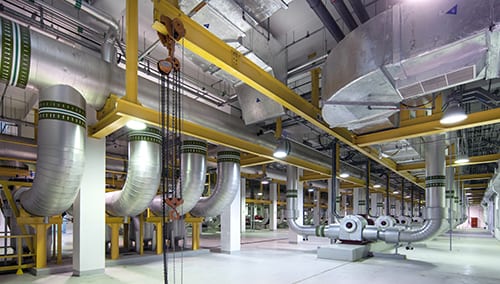 Cooling systems provide a suitable environment (warm and wet) for microbes to proliferate and form colonies. Bacteria can grow in condensers and cooling tower fill, fungi on and in cooling tower wood, and algae on wetted cooling tower components exposed to sunlight. A major problem with microbes, particularly some bacteria, is that once they settle on a surface, the organisms often secrete a polysaccharide layer (slime) for protection. This film can severely inhibit heat transfer, but it also collects silt from the water and grows even thicker, further degrading heat exchange and potentially inducing underdeposit metal corrosion.

Controlling microbiological fouling is a key component in cooling water system treatment, and the core chemistry is currently based on an oxidizing microbiocide.

Chlorine gas was the workhorse for many years. When chlorine gas is added to water, the following reaction occurs:

Hypochlorous acid (HOCl) is the killing agent and functions by penetrating cell walls and oxidizing internal cell components. The efficacy and killing power of this compound are greatly affected by pH because of the equilibrium nature of HOCl in water, as shown in equation 2:

OCl– is a much weaker biocide than HOCl, probably because the charge on the OCl– ion does not allow it to effectively penetrate cell walls. Chlorine’s killing efficiency significantly declines as the pH rises above 7.5. Because most cooling tower scale/corrosion treatment programs operate at an alkaline pH, chlorine chemistry may not be the best choice in some applications. Chlorine efficiency is further influenced by ammonia and organics in the water, which react irreversibly with the chemical and increase chlorine demand.

Because of safety concerns, liquid bleach (NaOCl) feed replaced gaseous chlorine at many facilities, although bleach is more expensive. It contains a small amount of sodium hydroxide, so when it is injected into the cooling water stream, the pH increases, perhaps only slightly, but if the water is alkaline to begin with, most of the reactant will exist as the OCl– ion.

A popular answer to the pH issue has been bromine chemistry, where a chlorine oxidizer (bleach is the common choice) and sodium bromide (NaBr) are blended in a makeup water stream and injected into the cooling water. The chemistry produces hypobromous acid (HOBr), which has similar killing powers to HOCl, but functions more effectively at an alkaline pH.

Figure 2. Dissociation of HOCl and HOBr vs. pH

Other alternatives include chlorine dioxide (ClO2), monochloramine (NH2Cl), and monobromamine (NH4Br). The latter two are weaker than the others but appear to be more effective at penetrating the protective slime layer produced by bacteria to directly attack the organisms.

ChemTreat recently developed a new halogen stabilizer/biodetergent applicable for bleach-only oxidizing treatment programs. The product itself has no biocidal properties, and thus does not fall under regulatory guidelines concerning biocides, but it helps stabilize chlorine and reduce losses from irreversible reactions. Also, the biodetergent portion of the formulation, as its name implies, disperses the biofilm formed by the organisms and allows the biocide to contact the organisms directly.

For information on our specialty oxidant offerings, click here.