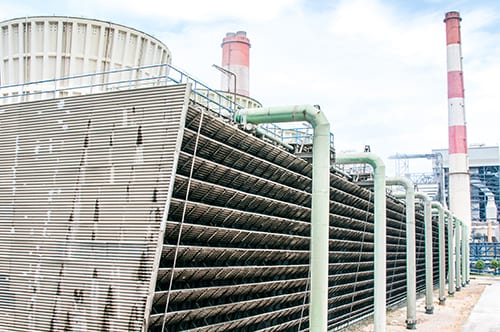 A recent post outlined the criticality of biofouling control in cooling systems. Seemingly slight lapses or upsets in biocide feed can allow microorganisms to flourish and establish harmful colonies in heat exchangers, process equipment, and cooling tower fill, among others.

The post outlined the effectiveness of common oxidizers such as chlorine (typically fed as bleach) and bromine for treatment of many open recirculating (cooling tower-based) systems, particularly if they are supplied with freshwater makeup. However, numerous facilities (refineries, chemical plants, steel and paper mills, food and beverage plants come quickly to mind) have cooling systems whose waters may contain elevated organics, nitrogen species, or other impurities that severely inhibit the performance of conventional oxidizers. Many systems now operate at a pH above 8.0, which significantly reduces the effectiveness of chlorine, as was illustrated in the previous post.

CD30TM is a specialty solution of chlorine dioxide (ClO2). This compound is a selective oxidizer, but even though it is chlorine-based, it will not react with organics or ammonia as chlorine does. Also of great importance is the compound is not influenced by pH, unlike chlorine, where the main hydrolyzed compound HOCl (hypochlorous acid) is converted to the hypochlorite ion (OCl–) at alkaline pH. OCl– is much less effective at penetrating microbial cell walls. The author previously worked with ClO2 at a power plant, where the chemical was generated on-site by a difficult process. On-site generation of CD30 is still required, but the method is safer and more straightforward than chlorine gas.

Another effective group of products is ChemTreat’s MillicideTM. These compounds are based on monochloramine (NH2Cl) chemistry. Monochloramine is a weaker oxidizer than chlorine, bromine, or chlorine dioxide, but research and operating experience show the compound is more effective at penetrating the protective slime layer formed by many bacterial colonies. Strong oxidizers are typically consumed by this slime, but the monochloramine moves through the layer to attack the microorganisms underneath.

For those plant personnel that still wish to use bleach (sodium hypochlorite), but whose cooling systems face at least some of the challenges mentioned above, ChemTreat’s SurfCleanTM technology may be of great benefit. These products contain a patented combination of halogen stabilizer and bio-penetrant. The former, as its name implies, stabilizes the chlorine in solution and provides a controlled release to more effectively attack microbes. The bio-penetrant greatly aids this process by destabilizing the protective slime layer to allow the oxidizer greater access to the underlying organisms.

When fresh water supplies were plentiful as makeup to industrial facilities, bleach and bleach-activated bromine served as efficient and inexpensive compounds for microbiological control. However, in today’s world where sustainability is a key word and makeup supplies at many plants are much less pristine, the old chemistry often just does not work well.

For more information on our specialty oxidant offerings, click here.