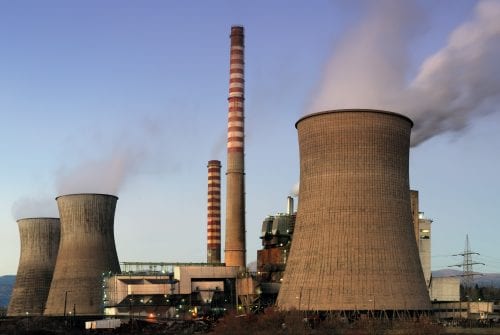 While many coal-fired power plants in the United States have ceased operation in the last decade, a large number remain in operation. In other parts of the world, coal-fired power continues to represent a major share of electricity production. Sulfur dioxide (SO2) emission control from these plants is essential for air quality protection, but several factors can influence this control, including variable coal sulfur content, reactant purity, and the efficiency of enhancement chemicals, as this entry will outline.

Personnel at a coal-fired facility in West Virginia faced constant problems with handling and feeding the reaction efficiency enhancer, dibasic acid (DBA), to the wet-limestone scrubber of their 770 mW supercritical steam generator. The product must be kept warm to prevent solidification, and there were delivery constraints, both from a distance perspective and the fact that tank volume had to be lowered to less than 10% before a fresh load could be introduced. Accordingly, the plant staff began full-scale testing and then subsequent application of an alternative, specially-formulated organic acid blend, ChemTreat FGD1105 (patent pending).

Almost immediately upon chemical addition, SO2 emissions dropped by approximately 35-40%, such that even at full load one o the scrubber’s five recycle pumps could be, and was, removed from service. Stack SO2 emissions only slightly increased from 120 lbs/hr to 200 lbs/hr following the pump reduction. This action alone reduced auxiliary power consumption by 3 mW, representing a projected annual benefit of approximately $700,000. As a test, the plant staff removed a second recycle pump from service and found SO2 removal was still more efficient than in the period prior to the FGD1105 addition. According to the Plant Manager, the ability to operate with 3 recycle pumps instead of 4 or 5 provided additional flexibility for recycle pump maintenance strategy while offering additional net revenue opportunity with improved unit efficiency.

Operating data after introduction of the FGD1105 also showed a significant reduction in limestone usage. Not only does this save on direct reagent cost, but reduced limestone consumption lowers maintenance and wear on ball mills and other slurry-generating equipment and piping.

Another indicator of the improved efficiency of the product vs. older technologies is shown in the following graphs.

Another aspect of the new chemical is it can be fed Neat or in diluted form. The Neat product has a freezing point of -11°F, making it well-suited for winter application in cold climates, as exemplified by this successful use in northern West Virginia. Either bulk or tote delivery is possible thanks to the low freezing point.

The staff at this facility calculated that switching to the new buffering product results in a potential benefit of $1,200,000 annually because of reductions in parasitic load and limestone usage. Also beneficial is that the improved scrubbing efficiency allows for additional margin in controlling SO2 emissions.

The enhanced chemistry increases flexibility when scheduling equipment maintenance, most notably slurry recycle pumps. For those plants where a high-sulfur, local coal is less expensive than lower-sulfur coal from farther away, improved scrubbing efficiency might tip the balance regarding the cheaper fuel. Initial data from several applications suggests this chemistry may reduce mercury re-emission from WFGD systems. Look for additional discussion of this innovative product in the future.

Acknowledgements
Acknowledgement to Dale Stuart of ChemTreat for his development of this patent pending chemistry. This information originally appeared in Power Engineering in February 2019.

Results are examples only. They are not guaranteed. Actual results may vary. Please contact ChemTreat for assistance in designing a treatment program customized for your application.  Like all other technologies, due diligence is necessary to determine the feasibility for utilizing methods. Always consult your equipment manuals and guides.