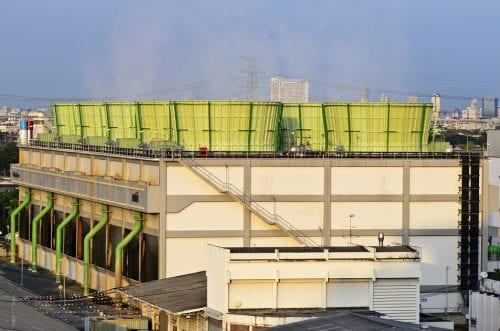 Control of corrosion and mineral deposition in cooling systems, especially those with cooling towers (aka open recirculating systems), can be a challenging and difficult task. Cooling tower evaporation induces a buildup of dissolved and suspended solids, increasing the corrosivity and/or scale-forming tendencies of the circulating water. Treatment programs have undergone significant evolution over the last half century, and now this evolution is being influenced by another factor: concerns over environmental issues related to cooling tower blowdown and the influence of some blowdown constituents on receiving bodies of water.

The History of Cooling Treatment

In the middle of the last century, the common industrial cooling tower treatment method was sulfuric acid feed for scale control with dichromate injection for corrosion inhibition. Chromate forms a pseudo-stainless steel layer on carbon steel, providing an excellent passivated boundary from the circulating water and its impurities. A typical pH range for these programs was approximately 6.0–6.5, and control was straightforward.

However, toxicity issues related to hexavalent chromium (Cr6+) led to the abandonment of this treatment scheme for all open and most closed cooling water systems. In most cases, the replacement was based on a core chemistry of inorganic and organic phosphates (phosphonates), sometimes with a small zinc residual for additional corrosion protection and a polymer to control calcium phosphate scale formation. Besides operating at a higher pH range (approximately 8.0–8.5), which helps reduce general corrosion, the technology relies on some rather complex deposition chemistry to provide additional corrosion and scale protection. Often, control of such programs can be described as “running on the razor’s edge,” as upsets can lead to either scale-forming or corrosive conditions.

Recently, phosphate/phosphonate programs have come under even more scrutiny as a result of issues related to phosphate discharge from cooling tower blowdown. Many natural bodies of water in the U.S. have become “phosphorus-impaired,” where the presence of this element is generating toxic algae blooms. Accordingly, phosphorus discharge from point sources such as industrial plants is being significantly restricted in many locations. Also appearing are tighter regulations regarding metals discharge, including zinc.

It is within this context that new, low- and non-phosphorus cooling water corrosion/scale inhibitor programs have been developed.  A case in point is ChemTreat’s FlexPro® technology, which utilizes what can be generically termed a reactive polyhydroxy starch inhibitor (RPSI) for corrosion protection, often combined with organic polymers for scale control. A key feature of the RPSI chemistry, and a primary factor that has made it popular, is that unlike phosphate/phosphonate treatment, it does not rely on deposition products to protect metal surfaces; rather, the compound forms a direct bond with metals. Thus, the “razor’s edge” aspect of control disappears.

Even so, comprehensive water analyses are necessary before applying this or any other program. Waters high in iron content may allow iron bacteria to develop, which can defeat even the protective layer formed by FlexPro®. There is no substitute for rigorous data when developing cooling water treatment programs.

Please contact ChemTreat for assistance in designing a treatment program customized for your application.

As with all other technologies, due diligence is necessary to determine the feasibility for utilizing methods. Always consult your equipment manuals and guides and seek ChemTreat guidance to address your specific system needs.