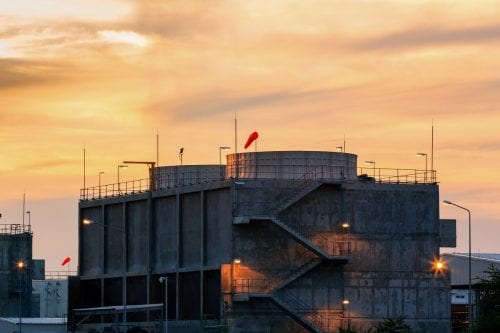 The History of Cooling Tower Treatment

Oxidizing biocides offer the primary defense mechanism against microbiological fouling in cooling systems. Chlorine is the biocide most often associated with water treatment. Produced as an element by Carl Wilhelm Scheele in 1774 and confirmed by Humphrey Davy in 1810, chlorine has had an enormous impact on global health since its introduction as a sterilizing agent for drinking water in the early 1900s, and for other applications even earlier.

For much of the 20th century, gaseous chlorine was the primary cooling water oxidizing biocide because of its effectiveness and low cost. However, safety issues and changes to cooling water scale/corrosion inhibitor chemistry have necessitated a change in biocide chemistry.

The hypochlorite ion (OCl–) is much less effective than hypochlorous acid as a killing agent.

This was largely not a problem in the middle of the last century, when cooling tower treatment commonly consisted of sulfuric acid for scale control and sodium dichromate for corrosion control. These programs offered straightforward control, with pH typically maintained within a 6.0–6.5 range. However, issues related to hexavalent chromium toxicity, emerged in the 1970s and 80s. They led to the abandonment of this treatment method for all open cooling water and most closed cooling water systems. In most cases, the replacement programs were based on a core chemistry of inorganic and organic phosphates (phosphonates) typically operating at a pH range of approximately 8.0–8.5. Chlorine and industrial-grade bleach became much less effective in these more alkaline waters.

Which brings us to today. Phosphate/phosphonate programs for scale and corrosion inhibition are now being phased out because of environmental concerns regarding phosphorus discharge, as evidenced by the many toxic algae blooms cropping up throughout the United States. Also, much more effective phosphate-free scale/corrosion control methods, such as ChemTreat’s FlexPro® technology, are now available. However, these programs still operate at a moderately basic pH, which inhibits the effectiveness of chlorine and bleach.

Bleach-activated bromine provides an alternative option by producing the analogous hypobromous acid (HOBr). HOBr dissociates at a higher pH than HOCl and can be more effective in alkaline waters. Compounds like monochloramine (NH2Cl) (such as ChemTreat proprietary SurfClean™ CL4515) and monobromamine (NH2Br) have also been developed. Although weaker than HOCl or HOBr, they penetrate the slime produced by microbiological colonies more efficiently, killing the underlying organisms.

ChemTreat has also developed a new stabilized halogen chemistry that offers better contact properties of the biocide, improving killing efficiency. (A Midwestern utility presented a paper on this chemistry at the recent 39th Annual Electric Utility Chemistry Workshop.) These programs can also be supplemented with nonoxidizing biocides that help offer a “one-two” punch against cooling system microbiological fouling.

Please contact ChemTreat for assistance in designing a treatment program customized for your application.  Like all other technologies, due diligence is necessary to determine the feasibility for utilizing methods. Always consult your equipment manuals and guides.