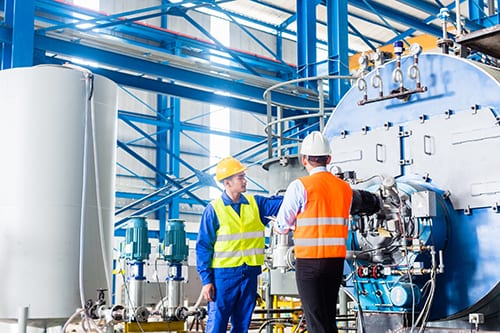 In the early 20th century, as steam-based power generating and industrial units increased in number and size, tri-sodium phosphate (Na3PO4, aka TSP) became a popular boiler water conditioning chemical for drum units. In the utility industry, phosphate treatment programs have undergone much evolution, with TSP used only in low dosages for modern units. For industrial boilers, phosphate treatment methods, with supplemental chemistry, remain a strong choice.

A primary function of phosphate is to generate moderately alkaline conditions in the boiler to minimize general corrosion of carbon steel boiler tubes, drums, and headers.

Although TSP is the only recommended phosphate species for utility boilers (to minimize the potential for acid phosphate corrosion), in industrial units TSP may at times be blended with lesser amounts of di-sodium phosphate (Na2HPO4) and perhaps, although not often, even a bit of mono-sodium phosphate (NaH2PO4) to control excess formation of sodium hydroxide (NaOH), aka caustic. Caustic can concentrate underneath porous boiler tube deposits and induce direct corrosion of the boiler metal.

A second function of phosphate; particularly important for units in which hardness ions may periodically ingress, is to control scale formation. Phosphate and the alkalinity produced by its reaction with water can react with hardness ions and silicates to form soft sludges that can be removed by boiler blowdown.

This is where things get interesting for industrial boilers. While utility units need high-purity makeup, the makeup and condensate return to industrial boilers may have significant impurity concentrations. Thus, in addition to phosphate treatment, sludge conditioners are usually recommended. Sludge conditioners consist of water-soluble polymers that help keep solids in suspension by a combination of crystal modification and sequestration. These polymers can sometimes serve as a stand-alone treatment, particularly if hardness ingress is not an issue.

Another technique that has at times been successfully employed in industrial drum units is chelant chemistry, in which the chemicals directly bind with metals to keep them suspended.  Ethylenediaminetetraacetic acid (EDTA) is the most widely known chelant and has been used for many applications, but improper chelant use can cause localized corrosion of boiler components.

The upshot is that several possibilities: phosphate/polymers, polymers alone, and chelating agents, exist for boiler water treatment. The proper choice of treatment depends on a variety of factors that include boiler design and pressure, makeup water treatment sophistication and reliability, and the potential for impurity ingress from condensate return.  In some applications, and most notably for the food and beverage industries, FDA regulations limit or restrict the use of some boiler water and feedwater treatment chemicals.  This can make the choice of a program more complex.

Also emerging are treatment methods based on film-forming products (FFPs), which provide a protective layer on steam generator metal surfaces. This chemistry could potentially be a game-changer in some applications.

Several choices are possible for internal treatment of industrial boilers, and these choices are influenced by a number of factors.

Click here to read part 1 of this blog series.